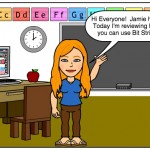 A teacher at Concordia attended a class on digital literacy and learned about a tool called Bit Strips.  Apparently this has been around for awhile, but I have never heard of it and really enjoyed creating the comic above.  Bit Strip really has everything you could want in a comic making tool.  You can create an avatar that looks like you, drag and drop scenes into the comic strip, easily change the pose of characters, easily add text and storyline pop outs, and lots more.  I played around on it for about an hour and still haven’t tried all the features.

But, there are lots of comic designing programs out there, so what makes this different?  The difference is that with Bit Strips For Schools you can create a class and students can share their comics with each other.  They can comment on the stories and easily collaborate on projects together.  This added collaboration piece takes Bit Strips up a notch on the SMAR scale and makes it a tool that I would recommend to teachers.

The first concern that came to mind is that students can create their own avatars and so there is always the chance that students could use this tool to create unflattering images of their friends.  However, this gives you, as the teacher, a great chance to talk about cyberbullying and digital citizenship.

The second concern is that it takes a lot of time for students to create comics – or at least good quality comics.  The first time I did a project with comic strips in my class I was surprised at the amount of time and energy that went into the project.  The other thing that surprised me was that it took a very different thought process for students to tell a story in a comic than they did when they were writing. This really shouldn’t have been such a surprise but I hadn’t realized how much I needed to modify my writing lessons to fit this type of media.

The possibilities are endless with this tool!

Do I plan to use it?

I’ve tried it myself, but now I have to find a spot in the curriculum where the time it will take warrants the benefit.  I think if I use this in the future it would be one of my go-to tools so that students are proficient in the tool and can focus on the skill being taught.

Medium/High – It’s medium for teachers to set up and learn to use but in terms of student time commitment, it’s high just because they need to be given time to work on it to produce a good product.

Best for ES MS or HS?

There is a 30 day free trial and after that you have to request a quote.

http://www.bitstripsforschools.com/ (Note that if you just search for “Bit Strips” in google you will go to the non-educational version that only links to Facebook and won’t be what you want to use with your students).