Next Dollar Up was created to give kids with special needs, such as Autism or Down Syndrome, confidence in money 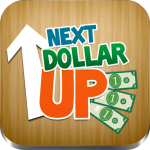 management. The inspiration for creating the app came from a classroom based life skills teacher.  She had previously used the concept of the physical game with her students and saw its merits.  However, this involved having to create her own item cards and money pieces.  As an early adopter of the iPad in the classroom, she searched the app stores and couldn’t find an app based version of Next Dollar Up for her students to work with.  Thus necessity was the mother of invention and Next Dollar Up became the first app in Limited Cue’s suite and went on to receive a nomination from about.com for Special Needs app of the year in 2013.   The learning concept of the Next Dollar Up strategy is simple. Rather than needing to mathematically solve for two decimal places and determine exact change, learners are taught to simply round up to the next dollar.  Thus they could never be overcharged by more than ninety nine cents. With the overarching goal of a life skills classroom to further students towards being able to become functioning members of their community, we built the app to help them learn and utilize the Next Dollar concept.  After working with the app, they should be able to walk up to a cashier and make a purchase with confidence in their abilities.   For any life skills teachers out there, we’ve made it simple for data collection with ten trials per session and also included correction procedures and positive reinforcers.  Since the original version, the app has also been updated to include levels with purchase items up to $50 dollars and an ‘alt’ currency version with coins to emulate currencies other than USD.  It’s available on the iPad as well as the iPhone and is eligible for the education volume discount.

During development I brought it into a self contained Life Skills classroom to let the kids try it out. It was quite rewarding to see the students reactions and progression throughout the app.

Next Dollar Up was designed to be dead simple. Most all learners including non-readers should be able to get started and figure it out in short order. Teacher supervision will obviously speed up the process.