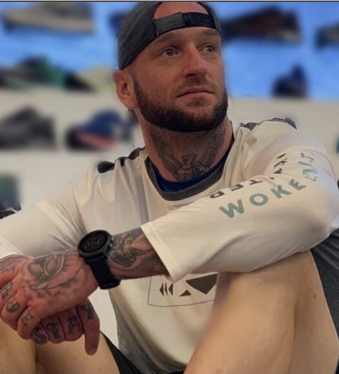 In today’s episode, I had the privilege to interview Shawn Livingston. Shawn is a 10-year military veteran having served in Iraq during his time in the military. Having sustained a serious back injury while serving, he required long term use of narcotic pain killers to get through each day due to the intense pain he was experiencing as a result of the back injury.

Over the course of two years, military doctor’s continued to prescribe these meds to Shawn which resulted in him developing a severe opioid addiction. This is when everything began to unravel for Shawn in his life. After finishing his time in this military, Shawn’s life spiraled further downward. Feeling lost and displaced, he turned to heroin to ease his physical and emotional pain. It was this heroin addiction that led to his arrest and landed him in prison for a period of time on drug possession charges.

Almost three years ago, Shawn was facing a 15-20 year prison sentence for drug possession charges, but in that very dark and desperate moment, he had the internal strength to turn his life around.

You’ll hear about his extraordinary journey and how physical activity, in particular running helped to transform his life. Shawn is now an up and coming ultra marathoner, motivational speaker and has devoted his life to serving others. It’s this service to others that has given him a clear sense of deep purpose in his life.

Shawn opens up about his life and his struggles in this episode, but also shares the amazing work he is doing with disadvantaged youth and with other military veterans who also struggle with opioid addictions.

Shawn’s struggles with heroin addiction and his transformation through ultra running will be featured in an upcoming documentary which is called Woke the Monster. You can find links to Shawn’s work and the documentary in the show notes of this podcast.

It was a genuine honor to interview Shawn. I hope you enjoy this episode with the inspiring Shawn Livingston.

After the tragic events of 9-11, right out of high school, Shawn joined the air force. He felt so young and naïve at the time. After a tour of 4 years, he found himself sliding down a very slippery slope. After receiving several cortisone shots and opioid pain due to a back injury sustained in training, Shawn developed a severe addiction to narcotic pain killers. He knew that these powerful drugs were masking more than the physical pain he was suffering from.

After almost bring imprisoned on drug possession charges, Shawn turned his life around through ultra-running and now devotes his time to serving others. Although he doesn’t consider himself to be a motivational speaker, he now finds himself front and center on many stages sharing his story in order to help others.

He is passionate about the community of people he has met through running and has found a sense of belonging to this running community.

He understands the need to step outside his comfort zone.

He understands that addiction doesn’t discriminate.

He now lives in Austin, Texas and serves others through his work with disadvantaged youth and other military veterans overcoming addictions of their own. Shawn’s life is being featured in an upcoming documentary entitled Woke the Monster.

A trailer to Shawn’s documentary can be found here: